The Year of Lear: Shakespeare in 1606

Author James Shapiro’s new book The Year of Lear: Shakespeare in 1606 considers the period when the playwright wrote three of his greatest tragedies, King Lear, Macbeth, and Antony and Cleopatra.

Dr. Shapiro is Professor of English and Comparative Literature at Columbia University and a member of the Folger Board of Governors. His previous micro-biography of Shakespeare, A Year in the Life of William Shakespeare: 1599, covered the composition of Henry V, Julius Caesar, As You Like It, and Hamlet. In that year, Queen Elizabeth was fending off the threat of a second Spanish Armada, attempting to suppress a rebellion in Ireland, and addressing (or more often avoiding) the issue of succession.

The Year of Lear picks up seven years later with Elizabeth’s successor, King James I, weathering increasingly frightening threats to his person, his people, and his kingdom. The discovery of the Gunpowder Plot in November of the previous year caused political panic, a resurgence of the plague killed 3,000 Londoners a week in August, and James’ attempts to unify the English and Scottish kingdoms were not going well. Each trauma rippled outwards: a threat to the King’s life was a threat to the nation and its people as much as the individual who sat on the throne.

Writing in the midst of these crises, Shakespeare created three masterpieces that reflect what Dr. Shapiro calls the “fraught cultural moment” of 1606. He also turned 42 at a time when average life expectancy was in the mid-40s for men.

Perhaps reflecting the playwright’s struggles, all three plays feature men grappling with the consequences of aging. King Lear and Antony struggle to maintain the hard-partying ways of their youth while Macbeth laments, “my way of life / Is fall’n into the sere, the yellow leaf, / And that which should accompany old age, / As honor, love, obedience, troops of friends, / I must not look to have”. 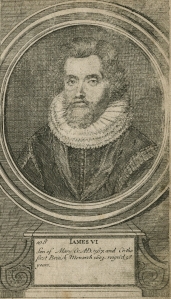 James I of England

Dr. Shapiro’s book lays out the case that Shakespeare’s writing was constantly influenced by what was going on around him: the eclipses of the sun and moon in King Lear, the scenes of royal partying in Antony and Cleopatra and the supernatural solicitings and fatal equivocations in Macbeth all have contemporary points of reference that may have influenced the playwright as he worked.

The chapters about Macbeth in The Year of Lear describe James I’s obsession with the occult and his firm belief that he was the leader in an epic battle of good vs. evil. His book on witchcraft, Daemonologie, encouraged witch-hunting and James personally presided over the interrogation of several suspected witches.

Ian Merrill Peakes as Macbeth at the Folger Theatre, 2008.

Dr. Shapiro points to several other incidents that may have influenced Shakespeare’s most supernatural play, including the performance of a short interlude where three young men dressed as sibyls hailed King James as father to a long line of kings, James’ description of Catholic conspirators as “the rarest sort of monsters”, and a young girl who claimed to be possessed and was unable to see a set of knives placed in front of her until she picked one up.

Shakespeare’s three tragedies of 1606 reflect the extraordinary events, people, and publications that filled up the year. Like the plays themselves, many of them were dark and scary and mirrored an increasingly fear-filled world back on itself. However, each play has at its end the hope of peace and restoration and of moving forward into a more promising future. As Dr. Shapiro says, “each Shakespeare play has its own distinct music” and it is up to us to listen.

Dr. Shapiro will read from and sign copies of The Year of Lear: Shakespeare in 1606 on Wednesday, October 7 at the Folger Theatre. Tickets and books are available online or by calling the Folger Box Office at 202.544.7077.

Queen Elizabeth has a long history of appearing on stage at the Folger. She was recently played by Holly Twyford …

The 2015/16 season at Folger Theatre kicks off with a special engagement of texts&beheadings/ElizabethR, which heads into rehearsal next week and we’re delighted …

Hello, dear readers of the Folger Production Diary! This is your friend Louis Butelli writing you once again. How’ve you …

Actor Ian Merrill Peakes (The Player) shares his final thoughts about the Folger Theatre production of Tom Stoppard’s Rosencrantz and Guildenstern are Dead.  …

Michele Osherow is the Folger Theatre’s Resident Dramaturg and has worked on over twenty productions here. She is an Associate Professor …

Actor Ian Merrill Peakes (The Player) shares his thoughts on the Folger Theatre production of Tom Stoppard’s Rosencrantz and Guildenstern are Dead.  …

Rosencrantz and Guildenstern Are Dead is officially open! Did that last Monday, to a full house of totally engaged and laughing patrons. …